Bonnie Ross, head of Microsoft’s Halo game studio, says, “You have the power to bring new worlds to life.” Maya Gupta, a Google research scientist, advises, “Don’t just solve the problem, write the code.” And Lisa Seacat DeLuca, a distinguished engineer at IBM, suggests, “If you can imagine it, it’s possible.”

They are among the women featured in a public service campaign, debuting Monday, that encourages girls ages 11 to 15 to get involved in science, technology, engineering and math.

The “She Can STEM” campaign was put together by the Advertising Council in collaboration with General Electric, Google, IBM, Microsoft and Verizon.

The companies advised the Ad Council and the New York office of McCann Worldgroup, which did creative work pro bono, on the campaign’s development. Each also identified a female employee in a STEM field to be featured in the campaign, alongside women who work at Boeing and the Adler Planetarium in Chicago.

The centerpiece of the campaign are videos in which the seven women discuss with girls (actresses with an interest in STEM subjects) what they do professionally and what the opportunities are. The professionals are also featured on the campaign’s website, SheCanStem.com, and in individual profiles on Instagram and in more traditional media.

“When girls don’t feel encouraged and empowered in STEM, we see serious consequences not only for girls and women, but also for the future of innovation in our country,” said Lisa Sherman, president and chief executive of the Ad Council. “If we want women at the forefront of the next generation of STEM leaders, we must show young girls that it is possible.”

The women featured in the campaign, or their employers, will post photos of them taken when they were girls, with a note that says, “If she can STEM, so can you.” The Ad Council will also encourage women in all STEM fields to do the same.

Girls will also be directed to @SheCanSTEM on Instagram, where they can find information on other women working in STEM fields and on resources from the campaign’s corporate and nonprofit partners. The campaign’s website also will contain information for parents and teachers. 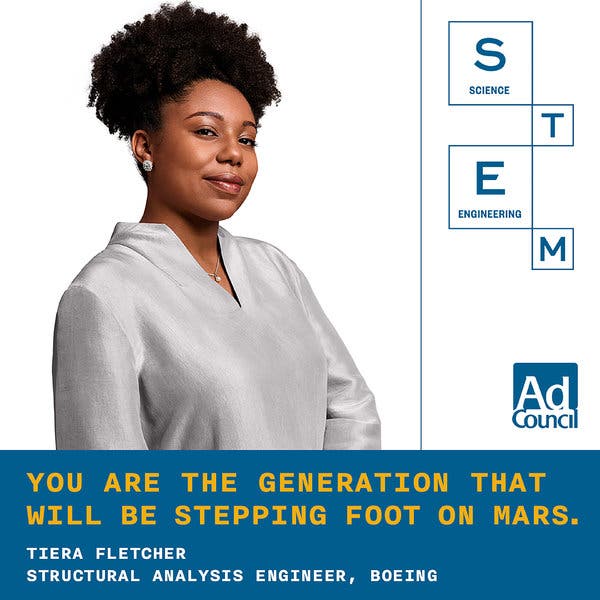 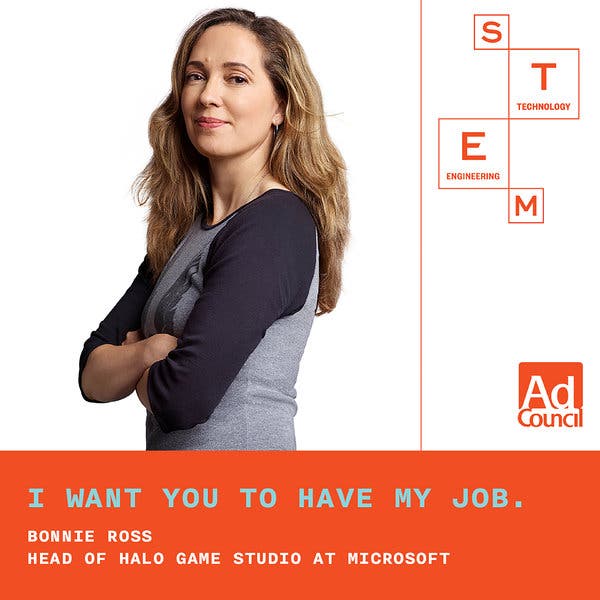 Michelle Peluso, senior vice president and chief marketing officer of IBM, pointed to “so much imagery of cool, nerdy Silicon Valley guys in sneakers” in the technology industry. “We want the girls to see all the amazing women in STEM and be inspired,” she said.

Others involved with the campaign include Karina Garcia, the YouTube star known as the Slime Queen; the Disney actress Olivia Rodrigo; Alyssa Carson, a space enthusiast and astronaut hopeful; and Mari Takahashi of the YouTube channel Smosh Games. Nonprofit partners include the Girl Scouts of the U.S.A., Black Girls Code, ChickTech, Girls Who Code and the Society of Women Engineers.

According to research by the Department of Commerce, women make up half of the college-educated work force in the United States but only 25 percent of the STEM work force. Studies by the Girl Scout Research Institute and National Center for Education Statistics show that many girls begin losing interest in STEM subjects when they are in middle school, a path that continues in high school and college.

Linda Boff, chairwoman of the Ad Council and chief marketing officer of General Electric, said it was “important to get the attention of young girls and inspire them through real STEM role models they can relate to.”

“It’s about inspiration — it’s about insight,” she continued. “If you show young girls women who have achieved in STEM, hopefully you’re showing them the pathway.”

G.E. has been involved in numerous initiatives to encourage girls’ interest in STEM, including a summer program for girls in the United States and other countries; educational programs in Boston, where its headquarters moved in 2016; and its “Unseen Stars” project, which projected the faces of 12 female scientists and engineers on the constellations painted on Grand Central Terminal’s ceiling last September.

The Ad Council’s message to girls “could have a big effect,” said Amy Fitzgerald, the outreach coordinator at the Massachusetts Institute of Technology’s Edgerton Center. The center, which is supported by G.E., provides educational resources for M.I.T. students, faculty and staff, as well as for students and teachers in kindergarten through grade 12.

It is vital that the campaign features “mechanical engineers, aviation engineers, women who get their hands dirty, not just in research-lab-coaty positions,” Ms. Fitzgerald said. “I want to see hard hats. Girls, especially, do not have an idea of the range of possibilities.”

The Ad Council is not the only organization trying to raise the consciousness of young girls about STEM. In June, Mattel introduced a robotics engineer Barbie and joined forces with Tynker, a game-based platform that teaches kids how to code, to offer Barbie-inspired coding lessons.

In addition, in the past few years, the Girl Scouts organization, which has offered STEM-related programming for over a century, has introduced new programs in space science and exploration, cybersecurity, mechanical engineering, robotics and computer science.

A version of this article appears in print on Sept. 9, 2018, on Page B4 of the New York edition with the headline: Convincing Girls That Tech, Science and Robots Are Up Their Alley. Order Reprints | Today’s Paper | Subscribe
Older Post
Newer Post